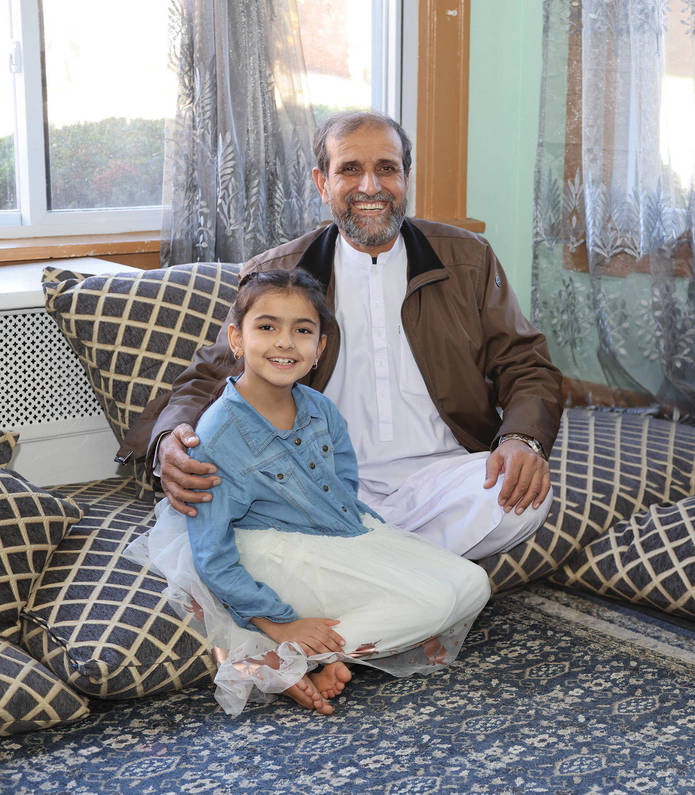 During the 20-year war in Afghanistan, thousands of Afghan nationals served as translators for the U.S. military – but at great risk from the Taliban. One of those translators was Abdul. In 2014, the U.S. Department of State issued Special Immigrant Visas for him and his family – except their 6-month daughter who had to remain with relatives.

When they arrived in Cleveland, Catholic Charities Migration and Refugee Services helped the family apply for immigration documents, including citizenship and a green card allowing Abdul to work. Though he had medical experience in Afghanistan under the mentorship of an Army physician, in Cleveland he has worked as a parking lot attendant and Uber driver.

Abdul and his wife made education a priority, immediately enrolling their six children in school, in spite of not knowing English. Their oldest child, Bihieshta, graduated with honors from Lakewood High School. She is now a senior studying health science at Cleveland State University and will apply to medical school.

Catholic Charities came to the family’s aid again in 2021 when U.S. troops departed from Afghanistan, causing a national crisis. Abdul feared for the safety of his youngest daughter still there. “When I heard news that the Taliban captured Afghanistan, I quickly called Catholic Charities attorney, Maureen, who handled the paperwork. She is very good and was so helpful.” In September, the family was reunited with their daughter, now eight years old, with help from the U.S. Air Force evacuation team.

“We didn’t know where to go and were scared for my sister and our family still in Afghanistan,” says Bihieshta. “Catholic Charities was really kind and helpful. They are in touch with what immigrants need and acted quickly during an emergency.”

Bihieshta feels horrible about what is happening now in Afghanistan. “It’s my childhood country and I miss it. I’m safe here but a lot of families like mine are in danger from the Taliban. We hope Catholic Charities can help other Afghan families in need of money and legal services. We really appreciate all the help we’ve received, and we will do our best to pay it back with our education, by helping others.”

"The joy is a sign that the Gospel has been proclaimed and is bearing fruit. Yet the drive to go forth and give, to go out from ourselves, to keep pressing forward in our sowing of the good seed, remains ever present."

Pope Francis, The Joy of the Gospel