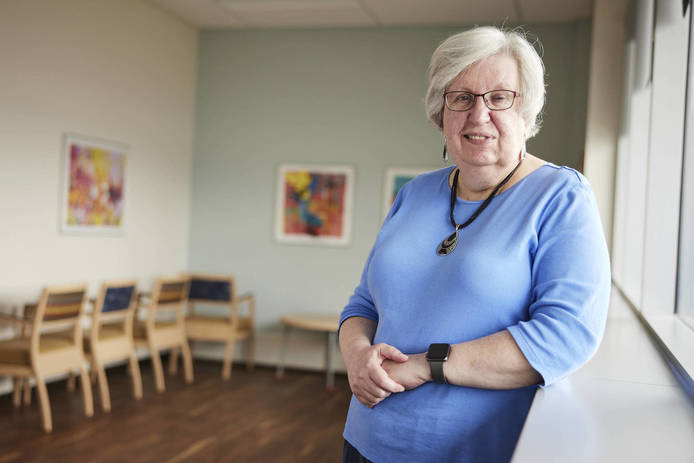 “It’s nice for me to imagine what will happen with my funds in the future,” says Dr. Deborah Brindza, referring to the legacy she is leaving to her favorite local charities through the Catholic Community Foundation. A pediatrician who works at University Hospital in Warrensville Center, Debbie’s generous commitment to the Diocese of Cleveland can be seen in multiple ways.

Her compassionate choices and attitudes were instilled and nurtured in her by the example and experiences of her family and their immigrant roots. Seeing the alienation experienced by her maternal grandfather, a non-English-speaking Italian immigrant, has given her a heart for those on society’s margins. It is important to her that all people receive the help they need. On her father’s side, her Slovakian grandmother insisted that she be enrolled in the First Catholic Slovak Ladies Association (FCSLA), an organization similar to the Knights of Columbus, founded over 125 years ago by eight women from Slovakia. Debbie went on to become FCSLA’s National Medical Director, a post she held for many years. Recently, she played a critical role in acquiring a significant gift from FCSLA to help establish the Culture Project in the Cleveland Diocese. The Culture Project is an initiative aimed at teaching Catholic youth about sexual integrity.

Following the example of her parents who faithfully gave to the Church, Debbie has also been quite generous in her own right. With her annual gifts to the diocese, she is part of the Mitre Society and the St. John the Evangelist Leadership Guild. The Guild gathers throughout the year for events that encourage spiritual development and Christian fellowship.

Apart from her annual gifts, Debbie has taken steps to include various ministries of the Church in her estate plan, making her a member of the Heritage Society. By establishing a Permanent Named Fund with the Catholic Community Foundation, her support of the Catholic organizations she cares about the most will continue beyond her lifetime.

“I’ve been blessed with success in my life, and I want to make sure that my money will do good things in the future,” she explains.

A Permanent Named Fund allows donors the freedom to contribute to it while living or even after death. The donor can also direct where the funds will go, for instance, to his or her parish, a particular school, Catholic Charities, or another ministry.

Debbie has set up her Permanent Named Fund to assist four beneficiaries: St. Andrew Abbey, St. Rita Church in Solon, Trinity High School, and Catholic Charities. Each of these ministries has a special significance to her faith. Debbie’s father grew up in the neighborhood around St. Andrew’s Abbey and was educated by the abbey’s monks. In due time, he made sure his daughter Debbie was baptized at the abbey, which makes it special to her as well. St. Rita Church is Debbie’s own parish today; thus, she says this gift is “very meaningful to me.”

She chose to fund a small scholarship at Trinity High School because Catholic education is important to her, and the school is near where she grew up in Garfield Heights. As a pediatrician, she sees firsthand the benefits of Catholic schools in her patients: “I do a lot of physicals for kids who attend Benedictine High School. And so, I know that—I see—in the community how they are doing well at school, and it’s because of the scholarship funds from Catholic communities and charities to help education.”

The witness of Debbie’s faith is clear from her work, the company she keeps, and her generosity. She encourages those who are able to set up such a legacy to follow the same path. “Take some time to think about what will happen, what you can do,” she says. “You can control where your gifts go and have some assurance. I know what will happen and what the objectives will be with the funds that I’ve set up. That’s very reassuring for me.”

Members of the Heritage Society understand how important it is to share the abundant gifts of our Catholic faith with the next generation. Bequests and planned future gifts help the Diocese of Cleveland continue and expand its ministries, serving those in need and building the Kingdom of God. Those interested in taking this step can go to catholiccommunity.org/legacy or contact Jean Ann Montagna at 216-696-6525 x8070, jmontagna@catholiccommunity.org.

"My wife and I believe very strongly that you can't outgive the Lord - He doesn't add blessings, He multiplies."