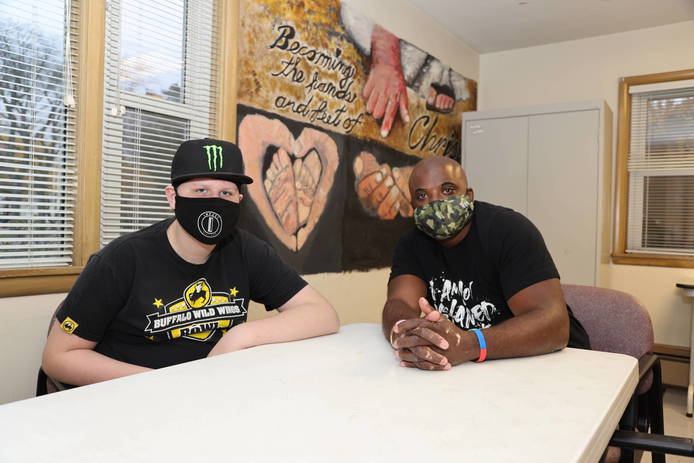 At 13, Michael seems like a typical teenage boy – loves video games, struggles with ADHD, is funny, has tons of energy, and doesn’t like math. But Michael has endured hardships most kids can’t imagine. His mother was just 17 when he was born, and he doesn’t know his father. His great-grandmother Shirley cared for him until he was three. He lived with his mother and her boyfriend and suffered their verbal and physical abuse. His mother later moved him to Texas, where at age nine he was left alone in a motel while his mother went to Las Vegas. Social services sent him back to Shirley, where Michael found love and stability.

But childhood scars run deep. Michael struggled with social skills and attempted suicide. In addition to counseling, Shirley contacted Catholic Charities Teen Mentoring Program in Lorain County to arrange for a trained adult male mentor once a week. He and Michael take walks in the park, go to a trampoline gym or the library. But mostly – Michael talks, the mentor listens, and life has changed.

“It was awkward at first, but it got better,” says Michael. “The mentoring improved my social skills and relationships. Teenagers already can be mean or grumpy but add extra problems and it can be permanent. I used to have bad depression and anxiety, but that got better with counseling and mentoring. Family is great to talk with, but some things you don’t want to tell them.”

During a year when Michael lost his grandpa and great-grandpa, Shirley is especially grateful for the Catholic Charities mentor as father figure and friend. “Michael has someone besides me to confide in, and they do fun things. He takes better care of himself and doesn’t want to kill himself anymore. He’s had no more detentions at school. The mentor gives him a chance to talk about things he keeps bottled up, so he manages his anger better. Not a day goes by that he doesn’t tell me loves me. The mentor has a lot to do with that.”

"As Christians, we must be generous. That is the Lord’s call to us, and I would suggest that Catholic Charities is the best way we can be generous with the blessings the Lord has given to us."