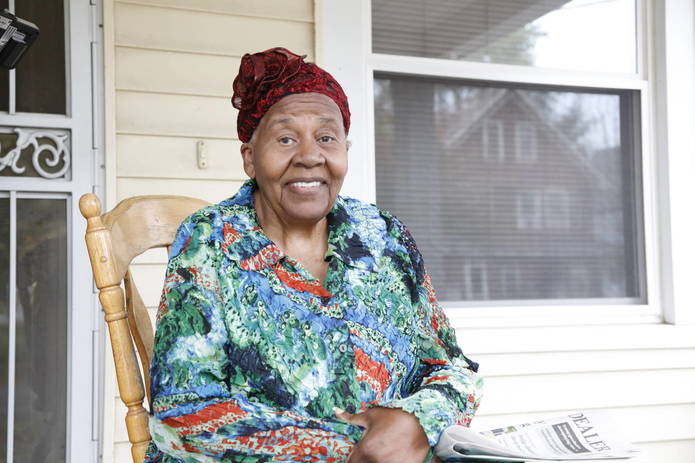 Wilma has lived in the Glenville neighborhood for over 18 years, and St. Martin de Porres Family Center has been an important part of her life ever since.

Before the pandemic, Wilma frequented the Center and participated in many activities provided to seniors. “The Center is very nice and conducive – there’s enough space with many areas where you can do many things. Some like to play cards or bingo, others like crafts and some others like to sit and talk and others like to just sit and watch television,” says Wilma. But when the pandemic caused the Center to close its doors, Wilma had to adapt to not seeing her peers every day. “Being isolated during the pandemic was hard. It was hard trying to figure out what to do with my time during the day because I was so used to having a full schedule every day,” says Wilma.

Even though their doors were closed, the staff at St. Martin de Porres Family Center knew that didn’t mean they had to stop their services all together. In fact, people needed them now, more than ever before – especially when it came to food.

“When I found out that meals would be delivered to my home, I felt really good. And it was nice to see some people from the Center that delivered my meals to me – the drivers that had taken us around to field trips now were the ones delivering the meals,” says Wilma. “If I didn’t have the meals delivered I would probably be eating lots of snack stuff since I don’t like to cook. But they sent us chicken and soup and vegetables and everything that we needed was in that meal,” she added.

Wilma looks forward to the day when the Center can open again, but in the meantime, she is grateful for the services that continued during the pandemic. “Thank you Catholic Charities for all your help, for your beautiful facilities, for all the great things you do for us, all the time and energy that goes into planning. Each day is full of surprises and we are very grateful to you because you’ve done a wonderful job,” says Wilma.