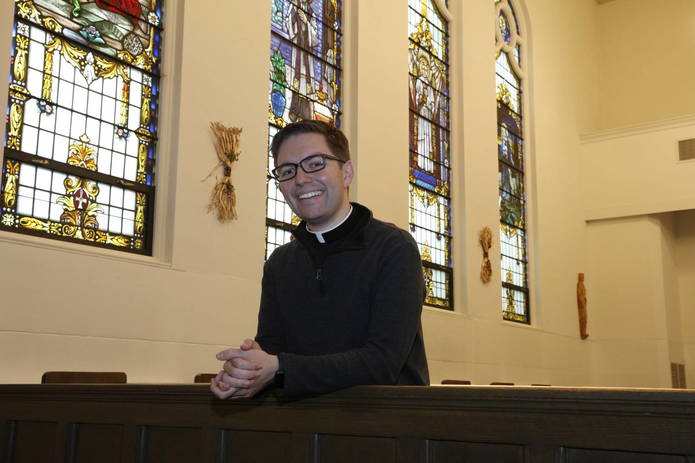 Some moments in life radically alter our path. For Alex Spenik, one of those moments occurred during his senior year of high school, just before the 5 p.m. Vigil Mass at Mother of Sorrows in Peninsula. Sitting with his mother in the back pew of the small historic church, he tried hard not to meet the eyes of Rev. John Terzano walking down the aisle, looking for a fill-in server. He received a polite “no” from Alex. But getting the elbow from his mother, Alex agreed. Thus began “a beautiful friendship” that included accompanying the pastor on a hospital visit to anoint a dying man. It was then Alex realized that while doctors and nurses could do much, they couldn’t do it all. It was then he saw the reality and the beauty of a priest’s role. And it was then that the doors to the seminary began to open.

Growing up near Akron, Alex attended Catholic grade school before going to Woodridge High School in Peninsula. He was valedictorian of his class and thought he’d be a doctor or an actor — never a priest. But his experiences with Fr. Terzano inspired him to enter Borromeo Seminary at age 18. Alex is now in year nine of studies for the priesthood, in his final year at Saint Mary Seminary and Graduate School of Theology. Alex was ordained a transitional deacon on August 7, 2020, and will be ordained to the priesthood on May 15, 2021 – “God willing,” he adds.

Alex describes his time in the seminary as helping develop him into a “fully alive human being,” with opportunities to widen his horizons. Much of that came from experiencing the Church around the world, serving in the diocesan mission in El Salvador, in an HIV relief immersion in Africa with Catholic Relief Services, and several trips to Europe. “There’s something special in my heart for the Developing World. The missions opened my eyes to see Jesus Christ in the poor, suffering, and marginalized. They are in every culture and every society. As a priest in Cleveland, I hope to serve those who are in need and have no one to provide for those needs.”

Highly proficient in Spanish, Alex has served the migrant and immigrant populations in Cleveland, doing his field education with Catholic Charities Migration and Refugee Services. He currently serves at St. Mary parish in Painesville, with Fr. Steve Vellenga, pastor. When asked the greatest strengths of our diocesan seminary, Alex is quick to reply: “Our pastoral education, with field education opportunities to encounter Jesus in the people of Cleveland. That’s where transformation happens. And in our community life, knowing priests nine years ahead of me and nine years after me. It makes our presbyteral community so strong when you really know the men kneeling next to you, and they really know you, your strengths and weaknesses.”

Alex says he and other Cleveland priests and seminarians have been deeply touched by support for the Heart of a Shepherd campaign to renovate and update seminary buildings. Alex’s own room has just one electrical plug, and everyone deals with Wi-Fi that comes and goes. “It’s very awkward to say you need help, but the fact that people of the diocese have responded so generously shows how much their priests and seminarians mean to them.”