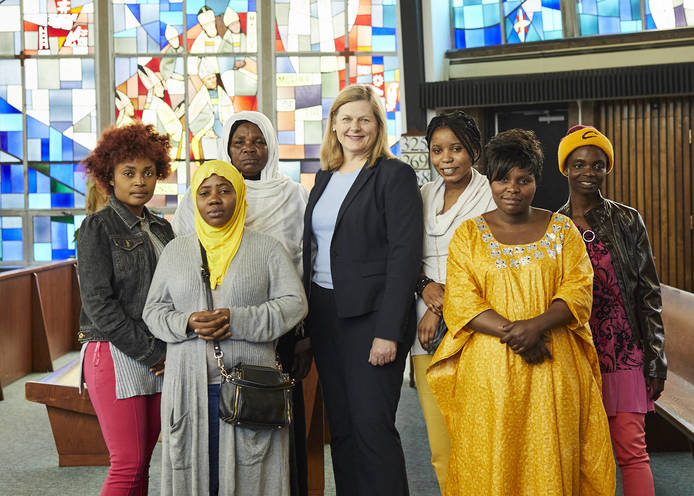 As someone who manages money for others, Diane Stack makes it a point to keep track of her own finances, making sure there are funds available to donate to worthy causes. “I feel confident in my projections that I can afford to give to others,” she says.

Donating to Catholic Charities and other organizations is the means by which Diane helps those in need. “We know that the Lord will take care of us, but we can’t sit home and wait,” she says. “We have to go out there and help Him.”

With her background as an investment manager, Diane knew she could trust Catholic Charities to put her donations to good use. “I recognize how efficient they are with contributions. Everything they do passes the sniff test,” she says. “I know these people are doing God’s work.”

When it comes to donating to charities, Diane believes it’s important to find something you believe in and therefore would want to contribute to. “Catholic Charities is so broad, and you can find something that you’re passionate about, whether it’s healthcare, addiction, education, and so on,” she says. For Diane, her passion leans toward housing for the disadvantaged. “There are chronic housing difficulties. It’s hard to find landlords who will accept transient people. It’s so hard for someone to be moving all the time, especially with children,” she says. “My personal dream is to create a communal setting for women and children to learn skills by helping in the kitchen, helping with daycare and working together.”

Through Catholic Charities, Diane discovered something very similar to her dream when she visited Migration and Refugee Services and, more specifically, Mary House, which provides temporary housing and support for refugee women and children. She was impressed with the opportunities for skill-building, education, legal assistance, and more that the organization provides.

“There is a sense of community,” Diane says about the facility. “Living independently can be isolating. This organization helps people get on their feet. I had no idea we had anyone doing this locally.”

Diane was also impressed with the people who devote time and energy to make programs like this one work. “They are tireless,” she says. “Their hearts are definitely in the right place. I have nothing but praise for the workers who put themselves on the front lines.”

Through her contributions to Catholic Charities, Diane sees to it that this tireless work continues. She focuses her other donations in the community on issues related to housing, including a current campaign by Lutheran Metropolitan Ministry to provide housing for previously incarcerated women and their children. “Providing an appropriate, safe place for people to live is something I care about,” Diane says.

Thanks to her connections with Catholic Charities, Diane is part of the ongoing effort to provide for immigrants and refugees. It is a natural extension of her commitment to affordable housing, she says.

“Many of us have a relative that came here from another country. Many of us know someone who was a refugee. We know it was their dream to come here,” says Diane. Contributions like Diane’s ensure that dream includes a safe and welcoming place to call home.

Would you like to make an impact that aligns with your hopes for the future? The Catholic Community Foundation can help by assisting with program funding options and Catholic Charities’ site visits. To find out more, contact Mary Lou Ozimek.

"To me, Holy Family Hospice is a small but very welcoming community of God’s people."