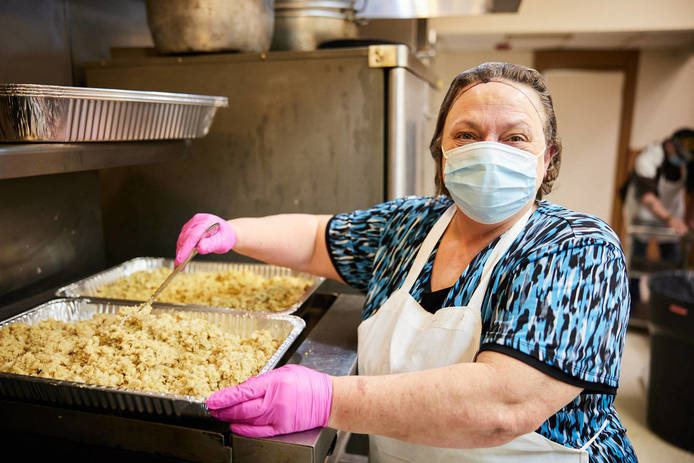 St. Augustine Hunger Center, a Catholic Charities facility in Cleveland’s Tremont neighborhood, has provided essential services to its community for over 50 years now. Never has such a ministry been so vital than during a pandemic when many people have lost their usual way of providing food for themselves.

In normal times, the Hunger Center would serve about 300 meals per day in a traditional sit-down style soup kitchen, but at the beginning of the pandemic, the center began serving 200 to-go trays and 300 delivery meals per day, according to Eric Milkie, Catholic Charities site director.

Michelle Feels Blessed To Be Where She Is Most Needed

None of the work at St. Augustine Hunger Center would be possible without the dedicated workers and volunteers who prepare food, cook, clean, and run mealtimes at the center.

One such worker, Michelle Habat, has been working full-time at the center since 2004, helping in any capacity she can, including the last four years as a cook.

Michelle began coming to the Hunger Center as a client before she started volunteering and was later hired. In her time at the center, she has done everything from cleaning, helping in the kitchen, serving food, and now cooking.

“I’m very blessed to have this job; there are not a lot of jobs like this out there. God put me where He needed me, where I needed to be. I get a lot of good out of this,” Michelle says.

At the start of the pandemic, many people, newly out of work and in need of food assistance, began calling the church, signing up, and coming down to the Hunger Center looking for help. To meet the needs of those relying on the center, staff and volunteers had to prepare hundreds of more meals each day.

Michelle prepares hundreds of meals for delivery each week. On Mondays, she makes 200 meals for the 2100 Lakeside Men’s Shelter. On Monday evenings, Michelle makes meals for the religious education class at the church.

On Wednesdays, she prepares 80 to-go box meals for guests at Catholic Charities St. Philip Neri Family Center; and every other Thursday she makes meals for the senior program at the church. In her free time, Michelle also prepares meals and side dishes for the Hunger Center, like one Friday when she made 16 pans of macaroni and cheese to be served the next day.

“If you had told me last year I could cook 600 meals in a day for people before the pandemic, I literally would have said ‘nuh-uh—no way, I can’t do that,’” Michelle says. “But now for me to cook 200 meals is nothing because I’m so used to it.”

When Michelle saw and heard about all the people in need, there was no question in her mind on what she had to do; and she was up for the task.

“What do you do? You do what Jesus told us.” Michelle says. “You feed His people. God gave us St. Augustine because, through this church, we were able to be there for these people.”

"Catholic Charities helped me a lot. Through the thick and thin, they were there to support me and help me continue to achieve my goals. I’m grateful to have them, especially during the pandemic when things got tough."